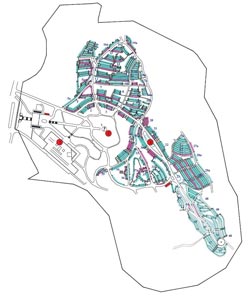 “Its mountain murmurs over the north side of Zagreb, the profile of its northern vista is cut into its lowest slopes, and the forest streams of Zagreb’s mountain let the tired city regain its breath, descending to shop windows and tram lines. The city and the mountain stand face to face, and the wealth of exciting tradition of the city that sprouted on the wooded scenery of old Medvednica, a warrior and a massive shield standing in the crossroads of civilization, life and death in the blue book of ceremonies of the mountains, live on, along with their cemeteries in eternal intimacy.

Cemeteries are the most dignified relic of the living and the dead. Zagreb treated its cemeteries accordingly, and the magnificent coincidence of the ideal configuration that it occupies and the history of Mirogoj’s sunny heights shine a unique gamma of lights on this relationship; the city authorities bought the land for Zagreb’s biggest and most beautiful cemetery at an auction held after the death of Ljudevit Gaj, the first leader of the Croatian National Revival. Such tradition and overcrowdedness of Zagreb’s cemeteries required an appropriate solution: all Croatian and foreign experiences pointed to the cremation technology, and the future crematorium complex had to be built as discreetly as possible in the chosen best location, Črleni jarek, also at Mirogoj. When the crematorium was finally built, the winning project authored by Zagreb architects Hržić, Krznarić and Mance exhibited a harmonious stratification of modern architectonic expression and traditional inspiration.

The crematorium building is hardly perceptible from the road, integrated into the hill’s shallow crevices, and only reveals its dignified expanse and depth after you have set foot in the spiralling hallways and descended to the last “harbour” with two memorial service halls, the naves, a big one and a small one, overlooking the grove-fringed valley.

The crematorium’s façades are constructed of bricks the same colour as the dried earth crevices that can be seen above the crematorium’s walls, and the external access hallways are constructed of the same bricks. The soil in the valley provides a visual artistic response to the walls. Even though covered in grass, the valley is unable to hide its true naked complexion, just as the choice of such façade material is unable to hide the intent to mimic the primeval human connection and habit of burying under ground, inside the ground, with the ground.

The interior of the hallways is paved in high-quality stone, and as they descend toward the deeper central rooms, they, just like the external walls, follow the oval lines of the valley. Each geometric tension is bridged over by oval semicircular and circular forms between the drapery of dark plush curtains, losing overly mournful dramatics, following rigid forms.

(Excerpt from the book “Mirogoj Crematorium and Urn Garden in Zagreb”)