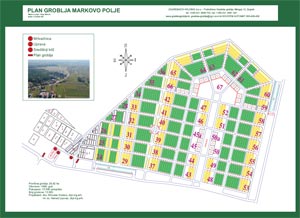 The new cemetery at Markovo polje in Sesvete was founded and put in operation on 1 December 1969, the same date when the old Sesvete cemetery was partially closed. The cemetery had a surface area of 4.02 ha. 3,070 burial plots were established in this surface area by 1993. The available plots disappeared during the war, when a number of refugees and displaced persons were buried there.

In 1996, Markovo polje was declared Zagreb’s third city cemetery. The development of the cemetery according to the design from 1995, authored by architectural engineers Miroslav Kollenz and Nenad Lipovac, was started the same year. The cemetery now has a surface area of 26.42 ha and 16,200 graves in which 17.450 persons are buried.