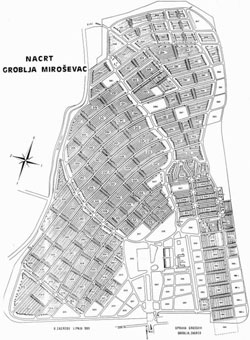 It takes a great deal of preparation and a multitude of alarming newspaper articles and publicly spoken thoughts before ventures such as a construction of a new cemetery are even considered. In this respect, the histories of Mirogoj and Miroševac are perhaps not identical, but very similar. It is no secret that the overcrowdedness of the then Zagreb cemeteries was debated a great deal in the 1860s. However, the actual work on the construction of the Mirogoj Cemetery only began in 1873.

Similarly, debates about the overcrowdedness of Mirogoj started in the 1940s and continued after World War II. A contemporary article in Narodni list newspaper warned that there was only room for another two or three months in Mirogoj. And yet, the first person was buried at the new city cemetery as late as in 1952, allowing another seven and a half years to pass since the beginning of the alarming period cited in the article. The new cemetery was still unfinished when the first burials took place there.

Since everything was done at the last moment, the very opening of the cemetery came into question, as the construction work proceeded in stages. The mortuary was built first, but there was no sewerage in the building because the construction of the supporting facilities was only planned in the second stage. And so the whole project was compromised by the lack of water supply and sewerage systems. Certain problems caused the contractor to be changed too. Fortunately, the only major incident occurred during the construction of the mortuary in the summer of 1951, when villagers showed up at the construction site, unhappy with the prices fetched by their land, which was purchased for the new cemetery, and the vicinity of the cemetery to their homes. Observant chroniclers noticed that there were no more protests after this incident, but that all larger trees that could have been incorporated into the landscaping of the new cemetery disappeared from the expropriated land plots, and the remaining old orchards, rotten trees and shrubbery had to be removed anyway, so almost all trees at Miroševac had to be planted anew.

The landscape architects Silvana and Josip Seissel wanted to preserve as much of the original landscape as possible, but this turned out impossible. Years had to pass before Miroševac earned its present epithet of one of the greenest and most beautifully landscaped cemeteries in Croatia. The green areas grew as the cemetery developed, albeit at a slower pace. Paths and walkways were built, the entrance area designed, greenery was planted around the mortuary, and the fields were decorated with evergreen shrubbery, birch trees and flowers.