The cemetery was officially opened on 6 November 1876.

As we learn from newspaper reports from the 1860s, the existing city cemeteries were overcrowded at the time, and a location for a new city cemetery had to be found. In 1876, Zagreb had 24,000 inhabitants and 10 cemeteries, or one cemetery per 2,000 inhabitants. At present, Zagreb has 21 cemeteries and close to a million inhabitants. Overcrowded cemeteries drove the city municipality authorities to arrange for the closing of St. Roch’s Cemetery (present-day St. Roch’s Park), St. Tomas’ Cemetery, and St. George’s Cemetery with the Zagreb Archdiocese in 1872. Under their arrangement, St. Roch’s and St. George’s Chapels were supposed to contribute 17,318 forints in cash towards the purchase of the land plot for the new public cemetery. In return, the city municipality pledged to build a beautiful cemetery chapel at Mirogoj. All the prerequisites to hold an auction for Dr. Ljudevit Gaj’s estate were thus fulfilled. Dr. Gaj incurred considerable debts when he remodelled the summer residence at his own cost and even built the access road to Mirogoj. Considering his large debts, an auction had to be held after Dr. Gaj’s death in April 1872. Dr. Gaj’s estate was purchased on 24 January 1873 with the intention of converting it into Zagreb’s central cemetery. This date could be considered the founding date of the Mirogoj Cemetery. However, the cemetery was not opened officially before 6 November 1876.

As promised, the city municipality left Gaj’s Park alone and planted lines of linden, maple, spruce, horse chestnut and other trees along all main avenues at the cemetery. The cemetery was handed over to the city authorities for use on 1 November 1876. It was divided into separate sections for different religions, with graves categorized as first, second and third class. The decision to establish the new city cemetery in Mirogoj elicited varying reactions, but the criticism proved unfounded, as Mirogoj was neither unsuitable nor too far away. On the contrary, it became one of the most beautiful cemeteries in Croatia. Mr. Friedrich Singer, a physical education and fencing teacher, was the first person buried at the newly opened cemetery on 7 November 1876. The city authorities organised a magnificent service for him.

Soon after it was opened, on 25 November 1876, Mirogoj got its Public Cemetery Statute, which defined the Cemetery as a general public cemetery for persons of any religion. Each religion was given a separate section of the cemetery “proportionate to its number of followers”. It was underlined in particular that persons of all religions had equal rights and duties as far as the cemetery was concerned. 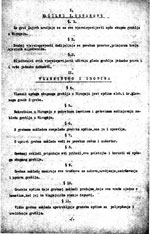 Mirogoj was a ground-breaker in more than one respect. While the old cemeteries in Zagreb were church properties, Mirogoj was the property of the city municipality. The documents mention the Mirogoj Foundation, which encompassed all immobile properties, cash and mobile properties, and was managed by the city municipality alone. A separate account was opened to manage the Foundation, comprising all revenues, fees and benefits from the general public cemetery. The Foundation was also responsible for procurements, landscaping, maintenance and management of the cemetery, and any surplus funds were spent on the landscaping, expansion and decoration of Mirogoj.


SECTIONS OF THE PUBLIC CEMETERY

The cemetery consisted of the exterior and the interior section, which comprised a single unit. Under one of the articles of the Statute, “the interior and the exterior sections were divided along their entire length on the west side by a magnificent structure comprising tombs underneath arcades, a portal, and churches for various religious rites”.

The cemetery was also divided into sections by religion: Section A was for Catholics, Section B for the Orthodox, Section C for Protestants, and Section D for Jews. The Statute guaranteed each of the four legally recognised religions the fight to “full and unrestricted performance of religious rites during burials at the cemetery”.

A separate section of the Statute defined four types of graves: superior personal tombs, regular family tombs, individual graves and general graves. Superior personal tombs were built with the permission of the City Assembly, and the regular family tombs were located underneath the arcades and were built by the Cemetery Foundation on its own behalf. Under the Statute, the citizens could purchase such plots at a predefined price, with an extra charge as compensation for the land. The tombs under the arcades were sold “for evermore”. Individuals could build such tombs on their own behalf too with previous approval of the city authorities. The Statute grants every owner of a family tomb the right to erect a monument under the arcade arch adjacent to their wall, respecting aesthetic principles. The citizens could buy their own graves that were their property, and there were also the general graves that remained the property of the municipality. The Statute set forth the duty of the owners to maintain the graves and the markers, and sanctions for owners who failed to do so.

Even though the first Statute had regulated everything, some difficulties arose over time. The interest in the tombs underneath the arcades kept growing, and the arcades were expensive. The first arcades were only built in 1879, and as many as 38 years passed before the erection of all arcades that we have today was completed. The need for an expansion of the cemetery increased, ultimately leading to the amendment of the Statute, but this did not occur before 1913.